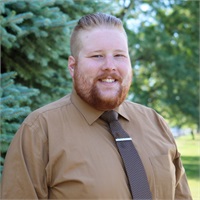 Jack was a resident of Whitehall for the first 28 years of his life, he currently lives with his amazing wife Jasmine in Downtown Muskegon. He has enjoyed the rebirth of the downtown district, and enjoys all of the fun that it has to offer. Jack and Jasmine are members of St. Michael the Archangel in Muskegon, and were married there in the fall of 2018. He is a graduate of Central Michigan University, and has been with Carpenter Insurance Agency since 2018. He believes that insurance offers him a great opportunity to be of service to others.

He is a die hard Detroit Lions fan, and became a fan at a young age watching Barry Sanders carry the football. He still holds out hope every fall that this year will be the Lions year. When he is not at the agency, you will most likely find him managing his antique booth at Four Corners Antique and Artisan Marketplace in North Muskegon. He loves history and his booth has a wonderful assortment of locally based items. His other hobbies include metal detecting, coin collecting, reading, team trivia tournaments, and walking down to the beach. He believes that gratitude is the number one attitude.